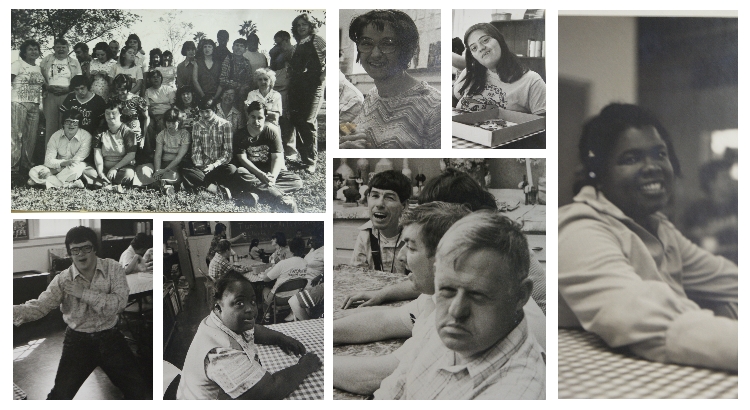 We’ve been serving people since 1962!

President John F. Kennedy introduced America to his sister Rosemary in the 1960’s.  Rosemary had been born with intellectual and developmental disabilities (I/DD), a reality the Kennedy’s kept hidden for years due to the negative social stigma of the day.  Inspired by their young president, a small group of Daytona Beach parents banded together and committed themselves to building a better life for their children with disabilities.

In August of 1961, the parents of seven children with I/DD and three other interested persons formed the organization that would later come to be known as The Arc Volusia.  The agency was officially recognized by the State of Florida and chartered as a non-profit organization on March 23, 1962.  Our first school opened its doors in September of that year at the local YMCA with seven clients and three part-time volunteers, with mothers assisting.

In 1965 we had opened a new school called “Happy Corner School” at the intersection of Wills and Stadium in the Welch area of Daytona Beach.  Our first paid teacher, Rosemary Simmons was hired at that time, and paid the magnanimous salary of $35 per week.  By 1968 we had a membership of 74, and were serving 41 students.

Ray Dahlberg joined the staff in 1968 as our first Executive Director.  Also that year, Tomoka Land and Development Company gave The Arc a five acre plot of land at the corner of Jimmy Ann Drive & 5th Street in Daytona.  This site serves as our Daytona Campus today.  (Ten years later – Tomoka donated 10 additional acres.  The entire 15 acre plot was valued at the time to be worth approximatley $277,000) .  By this time we had four locations:

On June 1, 1971, Jack D. Dunkle was hired as our 2nd Executive Director.  Under Jack’s leadership the agency continued to grow, and new programs were added.  That summer, our camp program was begun thanks to the efforts of the Reverend Hal Marchman.  This camp experience is known today as “Labor of Love Camp,” and provides approximately 100 adults with I/DD the opportunity to have a “summer camp” experience.  In 1973, our agency coordinated the first Special Olympics event in Volusia County – with 200 athletes participating.

Mr. Dunkle retired on June 1, 1977 after serving six years in the leadership role.  After a brief interim, Eugene Gabriel took over the reins in 1978, and continued to serve as our Executive Director for the next 20 years.  Under Gene’s compassionate and capable leadership, The Arc Volusia continued to grow and prosper – impacting more and more lives while creating the opportunity for hope, growth, and change.  Gene completed construction of the Daytona Campus AND established our campus in DeLand during his tenure.  When he retired on October 1, 1998 – he left us in better shape than ever before.

Today, because of the leadership of these early pioneers, we are a mission-driven, debt free agency.

The framework established by our founders:

This agency was created with great love and compassion.  The prevailing sentiment of the day was to send children with disabilities to state run institutions.  But these families wanted to keep their children close physically and emotionally by raising them in their own homes, and in their own communities.  Love, compassion, friendship and a sense of community are pervasive in our organizational culture.  That’s why we refer to those we serve as “friends,” rather than “clients” whenever possible.
In an era when the predominant belief was that people with disabilities should be institutionalized and isolated from the rest of society, our founders dreamed BIG DREAMS for their children.  This same attitude of hope and expectancy permeates all we say and do.
Our founders sacrificed their time, money, and energy to make this agency a reality.  We stand upon the shoulders of those pioneers who came before us.  The willingness to work hard and to do ‘whatever it takes’ to get the job done is still a big part of who we are today.
Those early leaders made a number of strategic financial decisions that set us up for fiscal health today.  Thanks to their wisdom and foresight – we have no debt, and we have funds in reserve!  We still experience financial limitations and occasional shortfalls in our operating budget, but because we have no debt we enjoy unusual organizational stability.  This stability enables us to operate with a long-term perspective, and to remain relentlessly focused on the well being of the friends we serve and the staff who serve them.